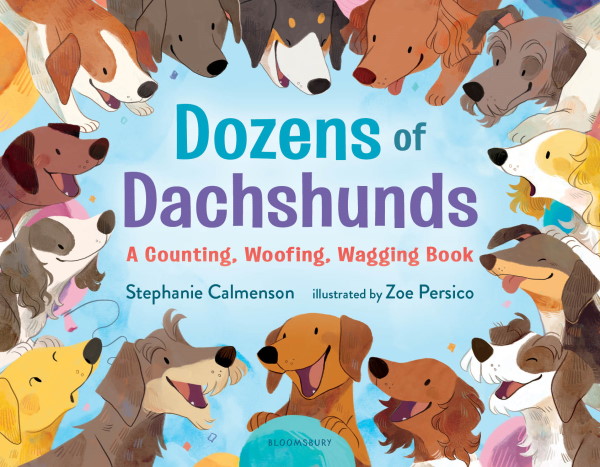 Illustrated by Zoe Persico
It's a woofing, wagging costume parade with seventy-eight dachshunds dressed up as birds, bees, books, dinosaurs, superheroes, and more. Count them. Sort them. Learn about this much loved breed and see Harry, the star of May I Pet Your Dog?, in his cameo appearance.

Dozens of dachshunds in clever costumes are the stars of a woofing, wagging costume parade! How many dogs can you count? Dressed up as birds, bees, books, dinosaurs and other delightful surprises, each new pair, trio, and group adds to the excitement. When the parade is through, there’s a joyous jamboree, complete with a sing-along, bark-along dachshund song. Back matter highlights the different sizes, coats and colors, and introduces the author’s own adorable dachshund, Harry.

“How do you combine counting, dachshunds, and adorableness in one book? You do it with vivid illustrations, rhyming language, and a parade of costumed pups… The rhythm of the story’s rhyming couplets adds to the upbeat nature of this work, and the descriptive language offers youngsters opportunities to make meaningful connections between the text and illustrations. By the time kids reach the story’s end, they’ll want to sing along with the closing song… Delightful dachshund facts round things off in the back matter.” —Booklist

“Dachshunds descend in a parade that celebrates their adorableness.  A pack of delightful dachshunds (one of which informs readers dachshund is pronounced “DOX-hund”) dashes down the street on their way to a Dachshund Day celebration. …The delightful doggos are dressed up for their big day in a wild variety of outfits … The cartoon art portrays dachshunds in all their diverse glory, categorized in a helpful glossary at the end…The multitudinous types of dachshunds are not the only diversity in the book. There is nearly as much seen among the children who are taking part, including children of different races and a brown-skinned child in a wheelchair that appears more than once (that child’s dachshund is dressed up as a book). There’s also a doxie that uses wheels. A parade of charm.” —Kirkus

Disclosure of Material Connection: Some of the links in the page above are "affiliate links." This means if you click on the link and purchase the item, I will receive an affiliate commission. I am disclosing this in accordance with the Federal Trade Commission's 16 CFR, Part 255: "Guides Concerning the Use of Endorsements and Testimonials in Advertising."